KEY DATES IN THE HISTORY OF GEOPROSPECTS

Geoprospects is the biggest company in West Africa providing a full range of geological exploration work on bauxite, gold, iron and other minerals.

Geoprospects was founded by Dr. Vladimir Mamedov in March 2000. Despite the fact that Geoprospects is not a direct successor of Geoconsult, it integrated into its ranks almost all employees of Geoconsult and acquired its equipment. Thus, we can speak of continuity in the work of these two companies

Geoconsult itself begins its calendar from 1995.

The first works were carried out in the Republic of Mali and were focused on analysis and geological expertise of earlier researches for gold.

In 1997, Geoconsult extends the territory of its activities and starts geological exploration in Guinea

At the same time, the company diversifies its services.

So, in addition to geological prospecting for gold and bauxite, Geoconsult performs drilling and blasting for companies such as Rio Tinto, SAG, SBK, CBG, including drilling and blasting of large blocks remaining after previous blasting. Thanks to a new optimized technology in carrying out the explosions these mining companies not only get rid of oversized blocks, but also filled up their ore reserves with high quality materials.

At the same time, the company develops drilling of water wells. 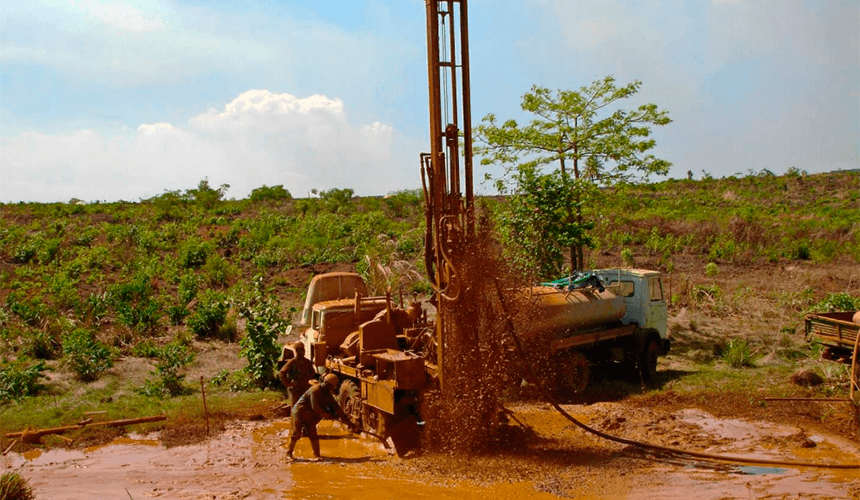 So in 1998 Geoconsult signed with a non-profit charitable organization Plan International Guinée a protocol of intent to drill 500 water wells in the prefecture of Gueckedou. However, after the invasion of rebels from neighboring Sierra Leone in September 2000, the work program was terminated. Of 500 planned wells only 130 wells were drilled, of which 94 were positive. 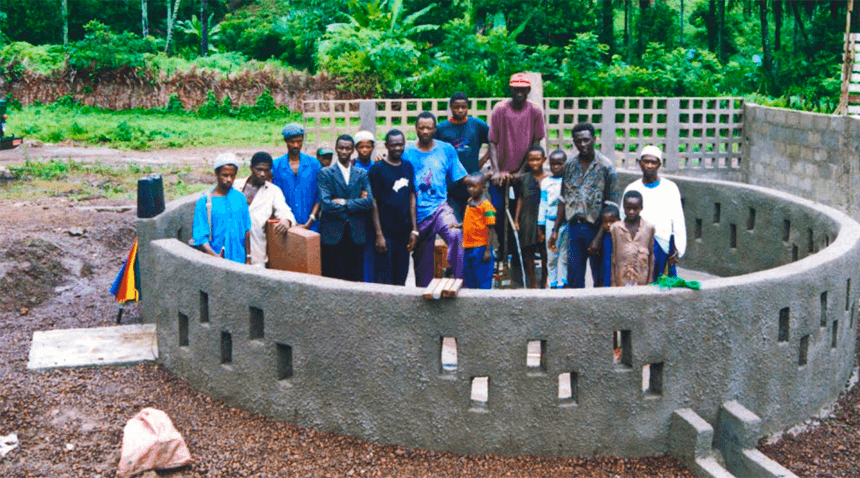 In 2005 – 2006 under the contract signed with Société des eaux de Guinée (SEG), Geoprospects performed at the foot of Kakoulima Mount, near Conakry, a full range of geophysical and hydrogeological investigations, drilled 77 boreholes, 15water wells, of which 7 could be used as production wells with the debit of 70-112 m3 / h

During the period from 1997 to 2014, Geoсonsult-Geoprospects drilled in Guinea more than 600 water wells, including 15high-output large-diameter wells.

The next stage of Geoprospects development begins in October 1997 with the signing of contract with CBG for regional geological exploration of bauxite. During the cooperation with this company, Geoprospects drilled 40,598 auger holes (437,598 meters), 1,038 core holes (14,702 meters) and opened 8,967 kilometers of access roads. More than 40geological reports has been prepared for CBG, which in addition to special studies included the evaluation of resources for various categories of bauxite ore. 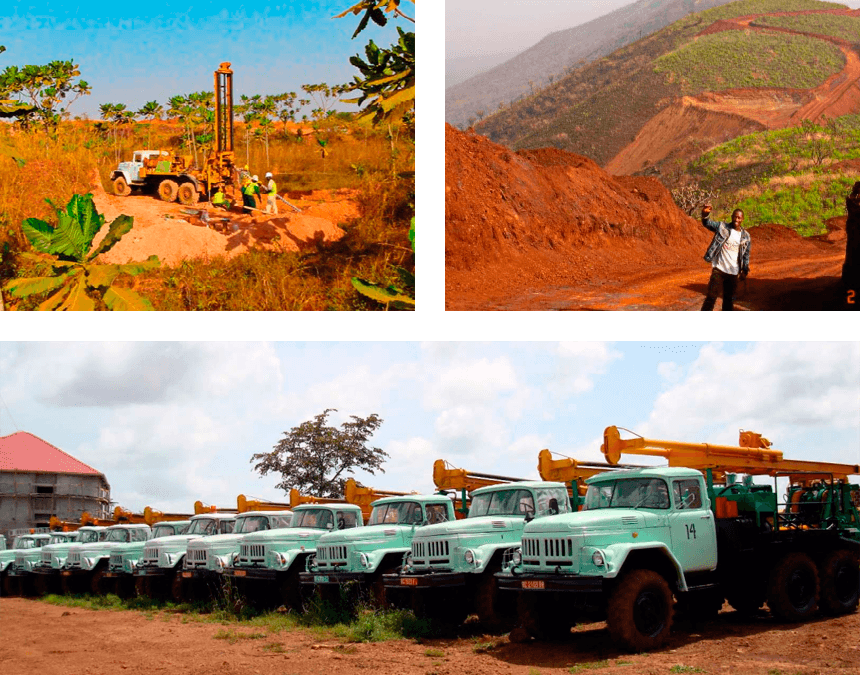 In 2003, a team of Geoprospects geologists, led by Dr. Mamedov prepared and published the “Map of bauxite potential of the Republic of Guinea” and complete “Catalogue of bauxite deposits and indexes” showing and describing in detail 894deposits and occurrences, which allowed for the first time in the history of the country to assess its enormous bauxite potential (over 40 billion tons of bauxite measured at cut-off Al2O3 40%). This map and catalog were presented at the International Geological Symposium in 2004 and aroused great interest to Guinea from the world’s major mining companies (Rusal, CVRD – Vale, BHP Billiton, etc.).

A new stage in the development of the company began in 2008 when Geoprospects started exploratory drilling of core holes on Simandou iron ore deposit.

In total, during the exploration of Simandou iron ore deposits for BSGR and VBG (Vale) and of Kissidougou deposit forCardoz financial international group, Geoprospects drilled 54,540 meters of inclined core drilling with depths up to 400 meters. 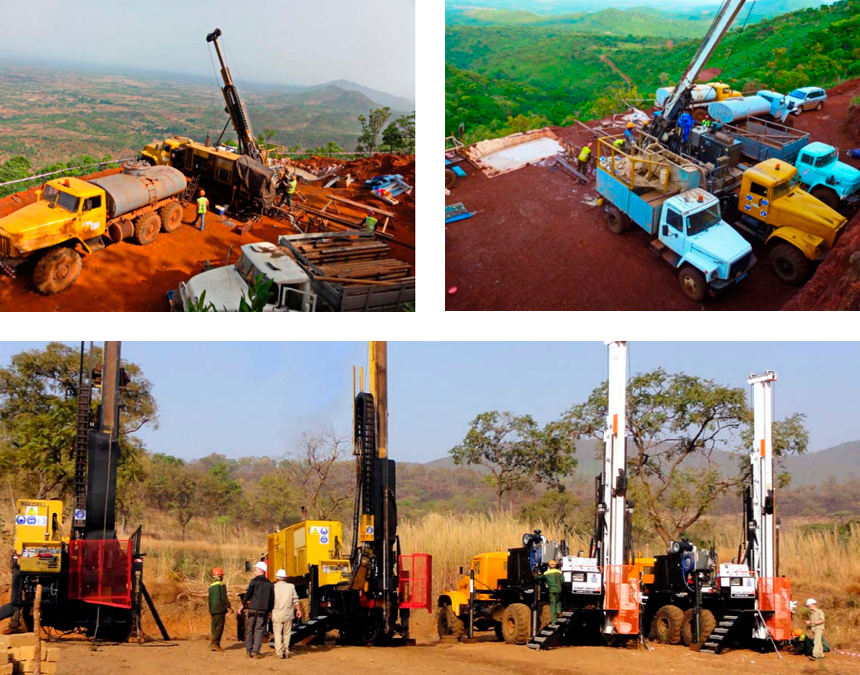 In addition to exploration, Geoprospects conducted geotechnical investigations during construction of roads, railways, bridges and ports, including in the coastal zone.

Geotechnical drilling on land was made for AMC, Rusal, CBG, Rio Tinto. In 2005 – 2012, Geoprospects took part in geotechnical researches conducted at sea in the port area of Kamsar, Benti and Dobali for CBG, RUSAL and Rio Tinto.

Having at its disposal a complete set of drilling rigs and all necessary equipment, Geoprospects was repeatedly called to take part in special drilling operations. In 2010, with the French company Sogea-Satom (VINCI Construction),Geoprospects participated in the construction of the bridge in Forecaryah, where it was assigned to the drill holes of one-meter diameter on embankments.

After temporary lull in the exploration of gold in Guinea, we constant the resurgence of interest for this type of precious metals.

In addition to this, we must mention the scientific activities of the company.

Given the enormous positive effect for the country caused by the publication in 2003 of the “Map of bauxite potential of the Republic of Guinea,” the Ministry of Mines of Guinea proposed to Geoprospects in 2005 to prepare and publish geological map and maps of minerals, explanatory notices and related catalogs for other useful minerals. To make this work, Geoprospects assembled a team of experienced geologists, led by Dr. Mamedov. It took over 5 years to make this work; the results were presented to the public at International Geological Symposium, held in Conakry in May 2011.

In 2012, in recognition of outstanding services to the Republic of Guinea in researches of bauxite and geological mapping, Dr. Mamedov, General Coordinator of Geoprospects, was appointed to the rank of Officer of the National Order of Merit. 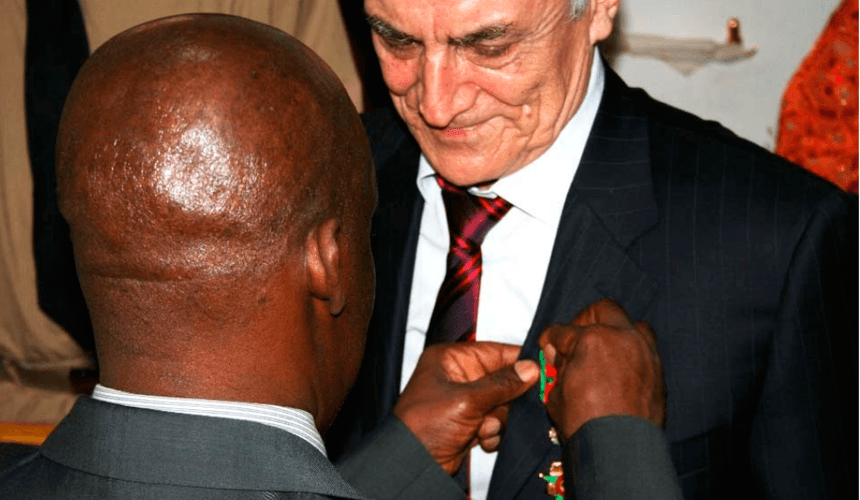 To carry out the full range of geological work, the campaign has all the necessary technical facilities and equipment; it has 223 engines, including:

- 34 rigs for various types of drilling,

- laboratory for sample treatment (drying area, stoves, diamond saw splitters, equipment for crushing and pulverization of samples up to 150 microns), equipment for determining the physical and mechanical properties of rock (natural moisture, bulk density in situ and on samples, etc).